“We’re the Yeah Yeah Yeahs, and we’re back!”

So screamed Karen O at the start of Yeah Yeah Yeahs’ hometown comeback concert at Queens’ Forest Hills Stadium on Saturday, October 1st. There was unrestrained joy in her declaration, something the sold-out audience returned tenfold in screams of their own, both sides of the exchange clearly thrilled to have the New York band back on stage. It started the night’s energy at a triumphant 10, and it never lowered over the course of an 18-song setlist.

Last month, I dug into my most-played records of the last 15 years, noting that YYYs’ It’s Blitz! struck me because “you could feel every bit of joy being pumped into” the songs. I’m happy to say that nine years after their last LP, that fact still holds. No matter that their new record, Cool It Down, is filled with some heavier themes; Karen O, Nick Zinner, and Brian Chase enjoy the hell out of playing their music live, and it all translates into one of the best live shows I’ve seen all year.

The new tunes also play beautifully in a live setting. Opener “Spitting Off the Edge of the World” (which didn’t feature a Perfume Genius cameo, but the studded limo from the music video was parked by the merch booth) could grow into one of the best in the group’s repertoire. Sandwiching “Zero” (with the return of the inflatable eyeballs bouncing over the crowd), “Burning” and “Wolf” proved that the trio are more than capable of penning a bop to match their biggest hits from over a decade ago.

Cool It Down had the most presence on the setlist, followed closely by Fever to Tell (including encore closer and confetti accompaniment “Date with the Night”). While Is Is made an appearance with “Down Boy,” Mosquito was left off entirely. No one is going to argue anything on It’s Blitz! or Show Your Bones should have been bumped in favor of “Under the Earth” or “Sacrilege,” but it was interesting that the band chose to ignore their last pre-hiatus full-length during a homecoming. 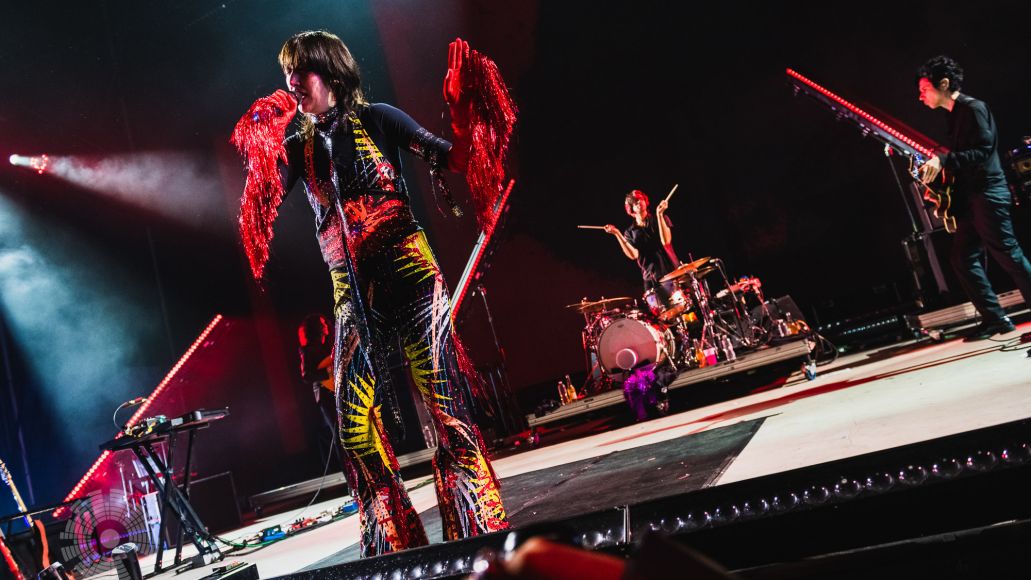 Don’t get it twisted: that’s just an observation, not a quibble. With the spirit the band brought to the evening, the setlist could have been half as long and featured half as many favorites and it still would have been a must-see show. Chase was constantly leaving his seat to bash down on his kit, scream at the crowd, or clap along with his sticks. Zinner isn’t one to wear it on his face in the same way as his bandmates, but he was pacing his corner of the stage and in constant engagement with the sound.