Kid Cudi has got quite the quest laid out for the rest of 2022: On top of his starring role in the highly anticipated animated series Entergalactic, his contributions to the full accompanying soundtrack including the new single “Do What I Want,” and hosting duties at his inaugural, Moon Man’s Landing festival in Cleveland, Scott Mescudi is now set to embark on the expansive “To the Moon – 2022 World Tour.”

Get tickets here, and read on for more details including pre-sale dates.

What Is Kid Cudi’s Next Tour?

The 37-city excursion kicks off in Vancouver on August 16th and travels along the West Coast via Portland, Seattle, and Oakland to San Diego, Los Angeles, and Phoenix. Heading east, the tour stops in Denver on August 27th, followed by three nights in Texas, Miami on September 4th, and Atlanta on September 6th. Making his way up the East Coast, Cudi will hit Washington, DC, Philadelphia, Boston, and Brooklyn, before landing in the Midwest via Toronto for his last solo headlining show in Chicago on September 16th. He’ll end the North American leg on a high note with a performance at his own Moon Man’s Landing festival on September 17th.

Cudi goes global next, hitting Tokyo, Japan on October 17th and jumping to Europe a month later for stops including Berlin, Germany on November 12th, The O2 in London on November 15th, and the tour closer in Milan, Italy on November 22nd.

Who Is Opening for Kid Cudi on Tour?

Don Toliver will perform at every North American stop on the “To the Moon – 2022 World Tour,” with additional support coming from Denzel Curry, 070 Shake, and Strick on select dates. Cudi and Toliver previously appeared together on “Moon” from Kanye West’s DONDA, and similarly, the Cleveland MC shared his first credit with 070 Shake on an earlier West cut, “Ghost Town.” Meanwhile, Cudi’s longtime collaborator Dot Da Genius has been teasing a new song called “Talk About Me” that will unite the two with Denzel Curry. It’s set to drop on June 24th.

Get tickets via Ticketmaster.

See Kid Cudi’s full list of tour dates below, and get tickets to all of his upcoming shows here. 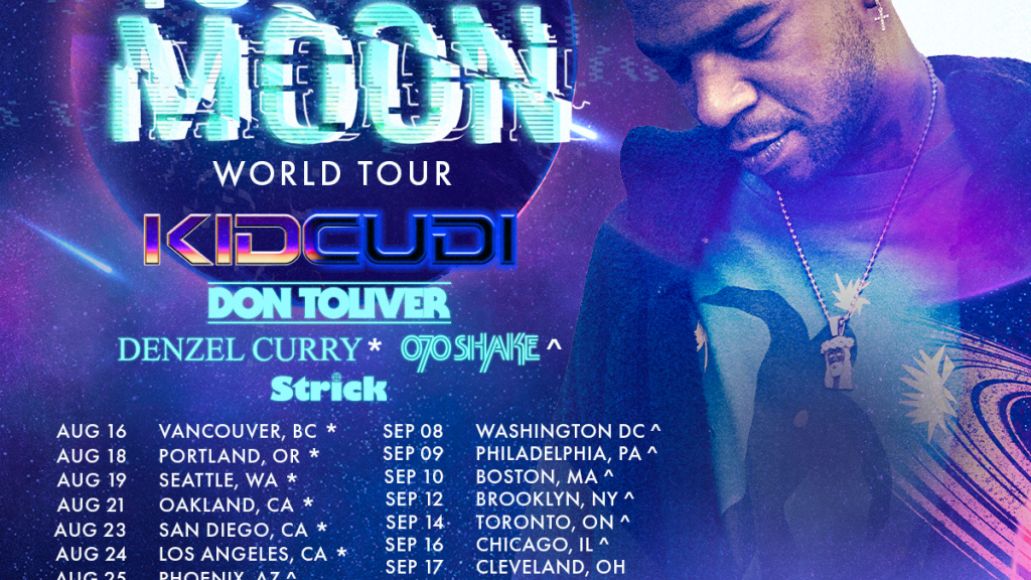