Whether you’re firing up your DVR or hitting play on a streaming service, maybe you’ve noticed how every episode of television you watch includes a short description of what the episode is about. For example, here’s the episode description for the Season 2 premiere of Netflix’s Bridgerton:

Anthony begins his search for a wife, Eloise braves her society debut, and Lady Danbury helps the queen choose a diamond among the season’s debutantes.

Clean, simple, concise, maybe a little dull. However, some episode descriptions, like that of Atlanta’s, are… different. The Emmy-winning FX comedy’s return this spring has brought with it a renewed appreciation for the show’s unconventional approach to episode descriptions, as The Mindy Project creator Mindy Kaling just recently noted on Twitter:

Atlanta is great this season but the episode descriptions continue to be my favorite thing pic.twitter.com/QkNOmScivT

This has been an Atlanta tradition from the beginning, as witnessed with the Season 1 premiere’s description:

Paper Boi? Who the hell is that? I swear everybody want to be a rapper now-a-days smh. Song is bumpin tho.

The point-of-view used for the Atlanta descriptions is up to interpretation, but the thoughts expressed seem to represent the voice of a disgruntled fan, prone to making comments like “They be trying too hard to go viral” — a whole additional layer of commentary on the series, should you happen to notice.

The words you see there don’t just happen by magic: Episode descriptions — or to use the industry parlance, “loglines” — have to be written. The question is, by who? An FX representative tells Consequence that in general, loglines for FX shows are always generated by the show’s creative team (not the network’s publicity department). This could mean they’re written exclusively by the showrunner, or as a collaboration with other writers/producers. In the case of Atlanta, credit goes to the full writers’ room. 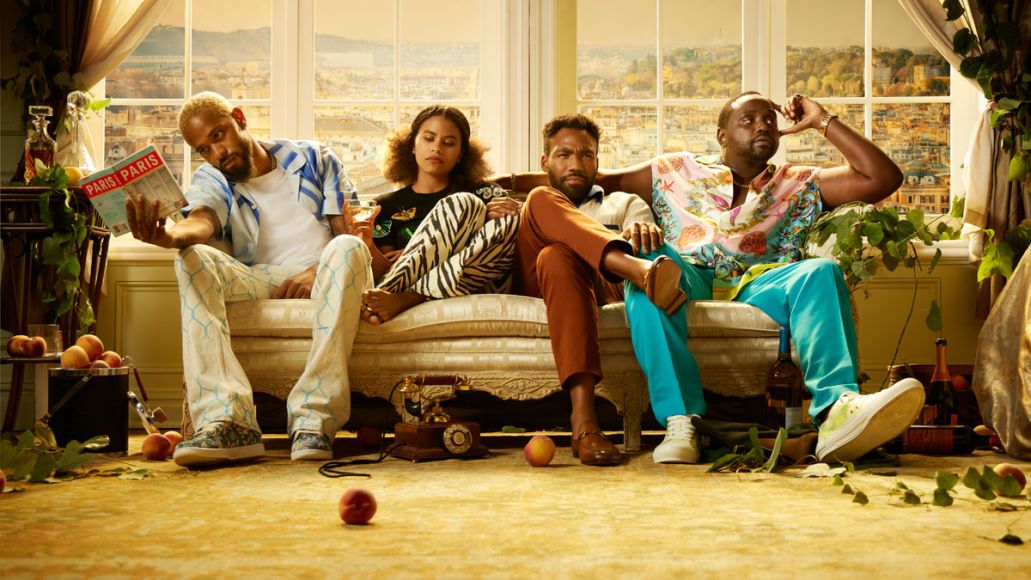 Atlanta isn’t the only show to have fun with more experimental episode descriptions, of course — this season, the HBO dark comedy Barry has been using slightly altered lines of dialogue from each episode to serve this purpose, creating an impressionistic (if plot-light) take on the episode — last Sunday’s episode, “ben mendelsohn,” featured the episode description “I could’ve been a marine, but I guess I had too many options.”

Another example is Adult Swim’s Rick and Morty, which has its own unique spin on loglines; according to an Adult Swim representative, the below and more were written not by Mr. Poopybutthole (as some fans have suggested) but by series co-creator Justin Roiland:

Season 2, Episode 1: “A Rickle in Time”
Rick don goofed this time and mussed up the whole time frame broh! Beth and Jerry get romantic!

Season 2, Episode 2: “Mortynight Run”
Morty don tries to save a life in this one broh! Get strapped in broh!

Ultimately these fall into the category of Easter eggs, a fun meta component for diligent fans to track that might also provide a little extra meaning for those looking for additional insight into the minds of the creators. Here are all the episode descriptions for Season 3 of Atlanta, including the remaining two episodes:

Season 3, Episode 1: “Three Slaps”
Wow it’s been a minute. I mean, I like this episode about the troubled kid but we waited 50 years for this?

Season 3, Episode 2: “Sinterklaas is Coming to Town”
I think everybody knows blackface ain’t cool anymore, we get it. They be trying too hard to go viral.

Season 3, Episode 3: “The Old Man and the Tree”
This one was cool. Going to rich parties and meeting weirdos. Season 1 was better.

Season 3, Episode 4: “The Big Payback”
I was legit scared watching this.

Season 3, Episode 8: “New Jazz”
Al and Darius walk around Amsterdam. Psssh, I could make a way better tv show than this.

Season 3, Episode 10: “Tarrare”
Yo Tarrare was a real person. Wild. They gotta stop biting these better shows tho.

Again, these are credited to the Atlanta writers’ room; we can’t say for sure whose voice they represent — the fans, the critics, creator Donald Glover’s own self-doubts — but if you’ve been watching this season, you know that they actually are pretty accurate for the most part, while adding a whole new level of meaning to the proceedings.

Just another reason why Atlanta remains a fascinating series to examine, one which doesn’t hesitate to showcase real people like Liam Neeson “apologizing” for his past, while simultaneously delivering its own Twilight Zone-style anthology installments.

The point is, next time you go to hit play on an episode of any show, take a moment to read the accompanying text. You might be surprised by the insight you find there.

New episodes of Atlanta Season 3 debut Thursdays at 10:00 p.m. on FX, with episodes available on Hulu the day after.