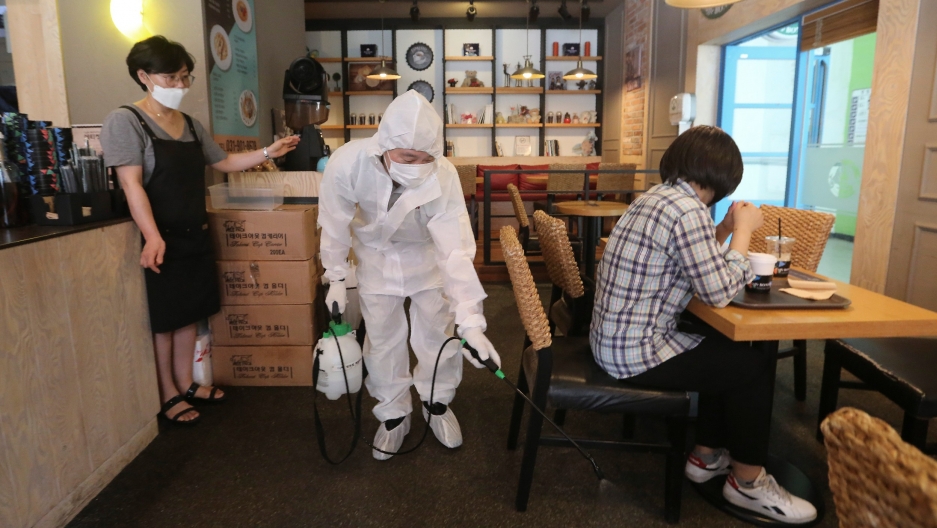 A worker disinfects as a precaution against the coronavirus at a café in Goyang, South Korea, Aug. 25, 2020.

South Korea is trying to stop a new surge of COVID-19 infections. And now, after restricting access to churches, health authorities are targeting another sacred institution: the coffee shop.

Cafés in downtown Seoul were nearly empty during lunch hour on Monday. These businesses are usually filled with office workers who drop in for a cup of their favorite brew and chat with colleagues before heading back to their jobs.

But as of this week, all franchise coffee shops in the capital region are prohibited from seating customers, who now can only get their caffeine fix on the go.

Coffee shops have recently come under scrutiny after at least 66 coronavirus cases were traced back to a Starbucks location north of Seoul last month, according to the Korea Centers for Disease Control and Prevention (KCDC). The new seating ban applies only to franchises, not independent shops — sparking some critics to question whether the restrictions go far enough.

At one café located on the ground floor of an office building, strips of yellow and black tape cordoned off tables and chairs this week. Staff take customers’ temperatures at the door and register their names and contact information using a QR code scanner.

After placing their orders, guests wait for the barista to call out their receipt number and then promptly leave with beverage in hand.

Of the 19,947 COVID-19 cases that the KCDC has recorded since January, nearly 25% were identified in the last month, according to the latest government data.

Throughout the pandemic, South Korea has placed relatively minimal restrictions on private businesses; there was never a lockdown, as in the United States and many other nations. But in recent weeks, some local governments have ordered the closure of venues where people cannot safely physically distance, including churches, fitness centers and karaoke parlors.

Now officials hope they can stop the virus from spreading out of control, in part by preventing customers from gathering inside some of Seoul’s thousands of beloved coffee shops.

“We believe that this week going forward is a very critical moment in determining if we can flatten the curve or not in the future,” Yoon Tae-ho, an official the Ministry of Health and Welfare, said during a televised briefing on Monday.

He urged the Seoul metro area’s roughly 25 million residents to put their lives on standstill for the rest of the week.

“Refrain from going outdoors, cancel your meetings and also minimize physical contact with others aside from your family members,” Yoon said.

Officials are expected to decide by the weekend whether to impose stricter social distancing measures.

‘People have let their guard down’

South Korea is one of the world’s biggest coffee importers, according to industry data. Nationwide, there are some 66,000 cafés, many of which are located in Seoul. And the capital is reportedly home to the highest number of Starbucks franchises of any city across the globe.

The cluster of cases from last month’s outbreak at a franchise scared away some customers at venues all around the country, such as Kim Min-kyeong, who says she had been dropping by cafés almost every day with colleagues or friends. She now says she feels these businesses are “dangerous.”

“It’s a good idea to ban seating,” said the 38-year-old who works for her family’s meat-importing business in Seoul. “People have let their guard down, especially at cafés, and everyone talks without wearing masks.”

“Everyone talks without wearing masks.”

Kim says she’ll mainly order from coffee shops that deliver — until it feels safer to return in person.

Working and socializing inside coffee shops is a big part of Korean culture, explains Lee Tae-ha, who runs a public relations firm in Seoul and monitors trends in the food services sector.

He says cafés are among the country’s most common small businesses. Yet he points out that, because of the stiff competition, many weren’t doing so well even before the pandemic.

Lee suspects that’s why the government only applied the seating ban to franchises, whose parent companies are often large conglomerates.

“Franchises are resilient,” Lee says. “I think the government was trying to protect small businesses.”

Under this week’s new provisions, restaurants and local cafés must close their doors by 9 p.m. But from a public health point of view, Lee questions why authorities are restricting access to the big coffee shops while still permitting guests to meet in local cafés and bakeries. He calls this a “policy blindspot.”

“If you go to a bakery shop, there are so many people,” Lee says. “Bakeries sell coffee, too.”

Related: Drones light up the sky in Seoul with coronavirus prevention messages

Some small business owners also question the practicality of Seoul’s restrictions. “It’s just for show,” says the owner of a café and sandwich shop in Seoul, who out of privacy concerns did not give his name.

He had already taken out a bank loan to pay staff salaries. And he questioned how much longer shops like his can survive the pandemic.

“The government should just close everything down for two or three weeks” to get the outbreak under control, he says, adding that maybe this solution would bring everything back to “normal.”